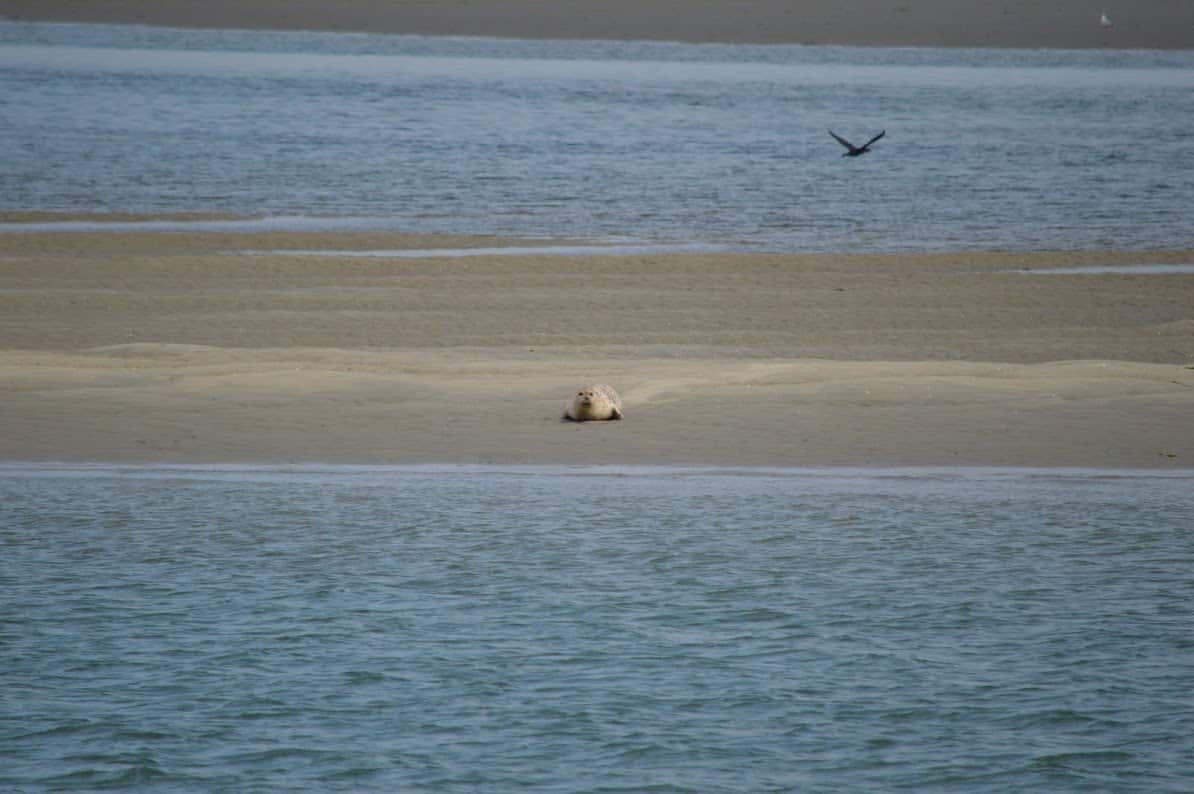 Dangers of swimming in the North Sea – The Dutch Coast

North Sea dangerous? North Sea most dangerous sea?
Every year, many people get into trouble in the North Sea. Especially the dangerous currents along the coast cause people to drown every year. With this knowledge you can safely enjoy the sea.

Summer has really started and many people are looking for a cool sea. Besides the local beach visitors, many people from other parts of the Netherlands come to the sea for a day, not to mention holidaymakers from home and abroad. It is striking that mainly people who did not grow up by the sea, are not aware of the dangers of the North Sea. It often happens that parents let their children play in the sea unsupervised. The dangers of the North Sea are often underestimated. Swimming in the North Sea is not comparable to swimming in a lake or river. When you take a dive in the North Sea, it is wise to know what the dangers are.

Jump directly to your topic

Don’t go too deep into the North Sea

When you seek cooling in the sea, it is wise never to go too deep. If you do decide to go further into the sea, don’t go alone. Swimming in the North Sea can definitely not be compared to swimming in a clear sea, where it looks like lying in an aquarium.

Never let children play alone in the sea. Make sure there is always supervision. Children can easily be overthrown by waves and pulled along by the strong currents in the North Sea. This is because the North Sea has dangerous and strong currents that cause problems for many people every year. Besides the question whether children can swim well enough and long enough, hypothermia and panic can cause serious problems. The latter also applies to adults.

Currents at the Dutch Coast

Children playing in the waves can also be overthrown and dragged along by the current. The children then panic which results in dangerous situations. The North Sea is quite dangerous, especially close to the coast.

What do you do when you are pulled along by the current?

Currents are always present in the sea, but many of the stronger, unexpected currents are often caused by muien. These muien, among others, make the North Sea a dangerous sea.

The sea is not equally deep everywhere. There are sandbanks under water. Between these sandbanks there are deeper channels through which the water flows faster, especially at low tide. When the water flows back to the sea, the current in a mui is soon too strong to swim against it. As mentioned above, it is important that in that case you do not panic but let the current carry you along to the sea, until you can swim out of the current. Muien in the North Sea are dangerous because you are pulled straight to the sea by the current.

Many people are less familiar with zwinnen than muien. They look like muien, with the difference that they are parallel to the coast and that they are at right angles to the coast. When the water retreats, the water from the zwinnen flows back to the sea via the muien. So zwinnen can also be dangerous because they lead you to muien.
It may well be that you are pulled along by the current, but that you also float parallel to the coast and a little later straight into the sea.

Offshore wind and the upper current

When the wind blows from land into the sea, you speak of a ‘offshore wind’. The danger of a offshore wind is in the upper current of the seawater. For example, look at a lake when the wind is strong. You will then see waves on the lake that move with the wind. The same happens at sea. When there is a offshore wind the wind pulls the water on the surface towards the sea. The harder the wind blows, the harder the water is pulled along by the wind. The current created on the surface is called the upper current. The dangerous thing about a offshore wind is that you are pulled along by the current towards the sea, especially when you are lying on an air mattress or other floating object. A strong upper current in the North Sea is certainly dangerous. This comes on top of the danger of the muien, zwinnen, Zoper and undertow.

When you are pulled along by the upstream stream towards the sea, the same applies again as indicated above. When you notice that the upper current is too strong to swim against it, it is safest to let yourself be carried deeper into the sea. Swimming against a too strong upper current will cause you to become exhausted and you will get further into trouble. So let yourself be carried away to the sea and try to attract people’s attention. Do not panic. You can also look around you to try to discover a sandbank where you can swim to. Further on in this article you will read how to recognize shallow water in the sea by the waves.

A offshore wind is therefore dangerous, but a onshore wind, in which the wind blows from the sea to the coast, is certainly no less dangerous. A strong onshore wind creates a strong undercurrent. So what is so dangerous about the North Sea with a onshore wind?

The danger of an undercurrent is mainly for children and the elderly, but anyone can get into trouble because of it. The seawater pulls you upstream towards the coast, while at the same time the undertow pulls you down towards the sea. Especially in the surf you can easily be pulled over and go under.
It is therefore not wise to go deeper into the North Sea than your knees in a strong onshore wind.

Of course, the wind does not always blow straight into the sea or straight to shore. The wind often comes from the sea diagonally towards the coast. So-called Zopers can also make the North Sea really dangerous. In a Zoper, the water flows parallel to the coastline. Swimming against the current is usually very heavy or impossible. This can reinforce the effect of the dangerous flow of the muien and zwinnen as described above. When you end up in a Zoper, let yourself be carried away by the sea until the current decreases. Try to swim diagonally back to the coast from there. Do not panic. When you don’t come back to the coast, try to attract people’s attention on a stretch where the current is less strong, or look for a shallow stretch in the sea (sandbank).

Airbeds, straps and other floating material is of course delicious to use in the sea, but it also brings with it an extra danger. You drift easily, especially when there is a offshore wind. It is hard work to get back to the coast on your own. There is also a chance that you will have to be taken back to the beach by the rescue team.

What do you do when you see that someone is in danger in the North Sea?

Imagine you’re sitting on the beach or you’re walking and you see someone in the North Sea who is in danger. Then don’t wait to see if that person is waving at an acquaintance or friend on the beach. If someone is really in danger, or if you immediately see that something is wrong, warn the rescue team immediately. If a post from the rescue team is not very close, don’t hesitate to call 112. State exactly where you stand. Usually there are poles on the beach that you can recognize, the number of the beach strike (passage from the dunes to the beach), or the name of the nearest beach club. Through the emergency center 112 the rescue team will be alerted. Stay where you saw the person who is in danger in the North Sea, in order to immediately send the emergency service in the right direction.

Many people who get into trouble are day trippers who don’t know how dangerous the North Sea is.

Along the entire Dutch coast where day trippers come to the beach, rescue brigade posts can be found. At these rescue brigade posts, beach flags indicate whether you can safely enter the sea, and what the dangers of the North Sea are at that time. The flags used are the same in all countries.

How to recognize shallow water from the shore

From the beach you can guess where the dangerous muien and zwinnen are in the North Sea.

Shallower stretches can be recognized by the turning of the waves, so the white heads of foam. Often you see waves turning on a certain part of the sea, this is the shallower part. This is where you should be able to stand.

When you follow waves from that point towards the coast, you will often see that the waves get higher but don’t turn, which indicates a deeper part in the sea. Recognizing shallow water can certainly be important if you swim in the sea and get into trouble. You can then try to swim to that shallower part so you can stand up.

Jellyfish in the North Sea

The North Sea is popular with jellyfish. This is due to the favourable living environment for the jellyfish. There are days when the presence of jellyfish in the seawater can ruin your day at the beach. Especially with a offshore wind, so when the wind blows from land into the sea, the chance of jellyfish is higher. When the wind comes from land, the undercurrent in the sea towards the shore will become stronger, and jellyfish can take to the shore.

What to do when you are stung by a jellyfish
You’re nice in the sea, and suddenly you feel an annoying feeling….. you’ve come into contact with the poisonous tentacles of a jellyfish. As long as you’re not allergic to jellyfish bites, you don’t have to worry. It is only annoying then. If you are allergic, a jellyfish bite can be dangerous.

The lesser weever lives close to the beach in shallow water and on sandbanks, so exactly where people walk in the sea. Here the fish digs in, in the sand. If you accidentally stand on the weever, he will use the poisonous spines on his dorsal fin to defend himself. Not a nice idea, especially if you know that the weever is one of the most poisonous fish in Europe.

Treatment stitch of the lesser weever

The lesser weever is actually the most dangerous fish in the North Sea, at least near the Dutch and Belgian sea coast. What do you do when you are stung by a poisonous lesser weever.

When you have been stung by this poisonous fish, you can expect severe and burning pain. A sting by the lesser weever is in principle not lethal but mostly very painful. Always see a doctor in case you have an allergic reaction.
If you don’t treat the sting, the pain can spread and last for weeks.

The poison of the lesser weever is thermolabile. This means that it breaks down quickly when exposed to higher temperatures. The best treatment is to heat the spot where you were stabbed as quickly as possible to a temperature above 40 degrees Celsius, and keep doing this for at least 15 minutes.